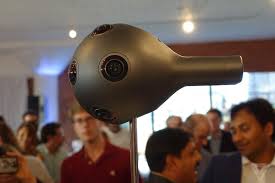 Lauching OZO, an Advanced Virtual Reality film maker..Nokia announced Ozo At an event for the entertainment industry in LA tonight. Ozo is in preproduction now, this camera is a spherical one aiming to capture the Virtual reality experiences around any space. it can capture both Audio and Video experiences in a seamlessway. Nokia plans its formal launch and would announce its expected price by this fall. Ozo may not targeted to consumers its predominantly the price would range for studios