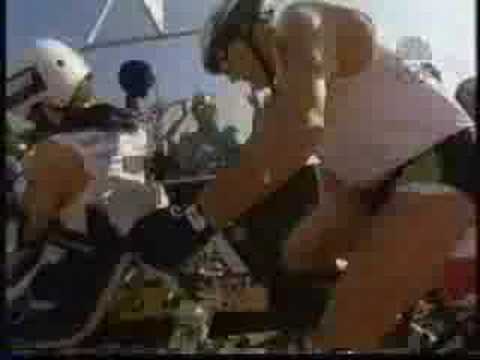 A son asked his father, “Dad, will you take part in a marathon with me?” The father who despite having a heart condition, said, “Yes”. They went on to complete the marathon together. Father and son went on to join other marathons, the father always saying, “Yes” to his son’s request of going through the race together. One day, the son asked his father, ‘Dad, let us join the Ironman together; to which his father said, “Yes”, too. For those who don’t know, Ironman is the toughest triathlon ever. The race consists of three endurance events of a 2.4 miles (3.86 kilometers) ocean swim followed by a 112 miles (180.2 kilometers) bike ride and ending with a 26.2 miles (42.195 kilometers) marathon along the coast of the Big Island. Father and son went on to complete the race together. Based on the TV interview of Dick and Rick Hoyt, Dick, the father explained that Rick while still in his mother’s womb, the umbilical chord was wrapped around his neck cutting off oxygen to the brain. And when Rick was born, the doctor who was looking after Rick told Dick and his wife that Rick would never be able to walk nor talk all his life that it would be best that they put him away. But the Hoyts would not be willing to do such a thing and decided to bring him home instead and decided likewise to treat him just like anyone normal kid. So that when the family went for a swim, Rick went with them and so on and so forth. It was one day while wathing TV (if my memory serves me right) that Rick saw a benefit marathon for a paralityc child and he wanted to be a part of the benefit marathon. And that started both father and son with their races even while Dick had a heart condition and Rick himself was not well all the time. In fact there were two years where they were not able to join the races because Dick had a heart attack and the other year was that (if I remember it correctly now, Rick was the one who had a problem. And also based on an article that I read about them, both had so far completed 212 triathlons, 4 15-hour Inronmans. And that it was two years back from today, when Dick had his heart attack, and his doctor said, had it not been his good physical condition on account of the races, he would have died 15 years ago. Both then via the races have served one another in a loving and wonderful way. Dick humbly said in the interview when he was called a hero by the interviewer, “I just simply love my family”. And indeed, he loved them even as he loved Rick that much that he committed himself to do the tough physical demands of the races and the triathlons, the Ironman that his son may have the chance to enjoy the races and be a part of life. And in a return show of love and appreciation, Rick says this of his father, “Dad is my hero.” And to end my inputs on the father and son, I’d like to end what Rick says that he likes most…(Rick types using a special machine), he says, “The thing I most like is my dad sit in the chair and I push him once.”