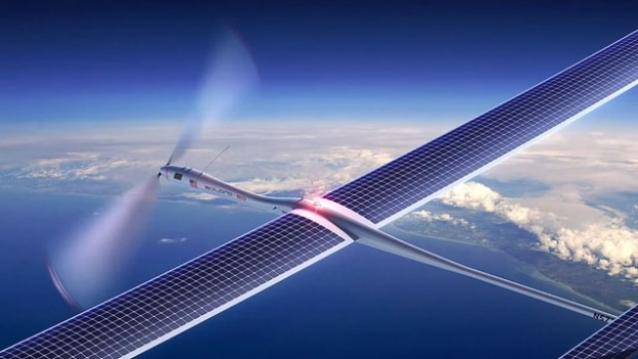 There’s always a Buzz around Facebook and Google on who does what first, End of July 2015, Facebook announced Â their new Solar â€“powered drone namely â€œAquilaâ€.Â Its all set to take off !

As a common case ,a drone is an unmanned aircraft which is remotely controlled from a control room for the purpose of doing some tasks at remote places .Here in the case of Facebook , it utilized the features of a drone to provide internet service to the remote areas across the world where there is no internet infrastructure is available .

It designed the drone such that it weighs only 400kg which is less than a weight of a car. It has the wingspan of a Boeing 737 jet .The drone will fly circularly in such a way that it covers a circular path whose radius will be around 3 kilometers. It can able to fly continuously for more than 90 days at a time. It will fly at an altitude of 90,000 feet (30 km) during the day time and 60,000 feet (20 km) during the night time.

For beaming the internet from the drone, Facebook used Laser technology. The company tested a new Laser that will transmit data at a greater speed of 10 Gbps. Interestingly the signal from the drone can exactly connect a point which is located at a distance more than 10 miles .For the total operation, a mother drone will be controlled by a ground station and the mother drone will feed other drones to make the internet kingdom.

This drone project is similar to the Loon project of Google .But Google is using Balloon instead of Drone. As per a report, till July 2015, nearly 10 % of world population is not provided with internet facility .So through these projects, there is a greatest hope in providing internet access to everyone in this world within a quicker period of time.