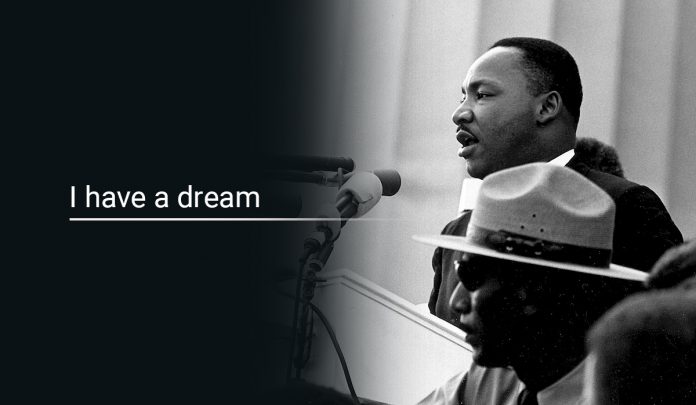 “I Have a Dream” is a public speech that was delivered by American civil rights activist Martin Luther King Jr. during the March on Washington for Jobs and Freedom on August 28, 1963, in which he called for civil and economic rights and an end to racism in the United States. Delivered to over 250,000 civil rights supporters from the steps of the Lincoln Memorial in Washington, D.C., the speech was a defining moment of the civil rights movement and among the most iconic speeches in American history.

Martin Luther King Jr was an American Baptist minister and activist who became the most visible spokesperson and leader in the civil rights movement from 1955 until his assassination in 1968. King is best known for advancing civil rights through nonviolence and civil disobedience, inspired by his Christian beliefs and the nonviolent activism of Mahatma Gandhi. He was the son of early civil rights activist Martin Luther King, Sr..

Highlights of the speech:

“I have a dream that my four little children will one day live in a nation where they will not be judged by the color of their skin but by the content of their character. I have a dream today.”

I have a dream that one day this nation will rise up and live out the true meaning of its creed “We hold these truths to be self-evident, that all men are created equal.”