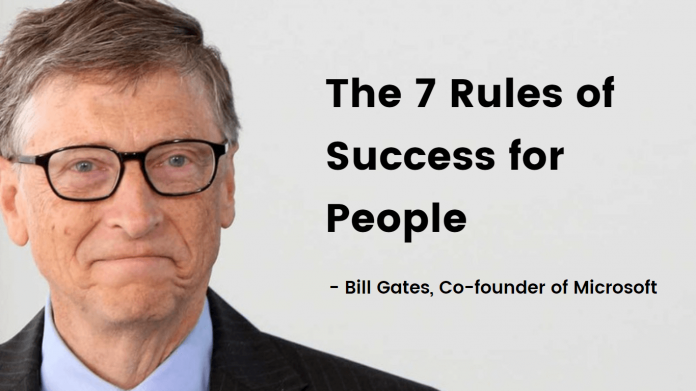 Bill Gates is my role model of success. He invented things we use every day and helped to make them so simple and effective! I always wondered how he did it!

In a series of clips, we get to see Bill Gates doing different things in order to experiment and better understand how he is successful. His ability to showcase his own failures reveals the specific traits we take an in-depth look at so that we can emulate them and improve our idea generation and decision-making skills in the process!

1. Study the competition – It is the first rule of Bill Gates motivational story, according to which he always keeps an eye on his competitors’ activities. It’s always better to do your homework about what these competitors are up to before taking any kind of action based on this information!

2. Have patience in your ideas – The second rule is to stick firmly to your goals. Every idea, no matter its potential for success, requires a minimum of 3 – 4 years before becoming marketable. And this is why one has to “stick with it” because it might not always look like your ideas are working smoothly resulting in failure after failure but if one keeps trying and isn’t discouraged, their work is likely to pay off in due time just remember that sometimes patience takes longer than we think it will!. Microsoft has been called “questionable at best” but Gates believed in his ideas and was willing to pursue them.

3. Work hard no excuses – it’s time to be really honest with yourself and anyone around you – there is no substitute for hard work. It’s only through being devoted to your task that you can begin to hope for a brighter future.

4. Change is necessary – Bill Gates strongly believes that change is very necessary for the survival and growth of any of the companies. The biggest companies in the world are able to make changes and implement them in their products and services, especially if they grow massively and scale themselves. Staying stagnant is not an option; you have to adapt and change with every obstacle or opportunity you come across in your work.

5. Believe in your vision – Vision is everything. For Bill Gates achieving his vision through believing in it decidedly proved to be a very instrumental means of achieving what he wanted, which was to turn Microsoft windows into a worldwide phenomenon that would make computers easier for everyone to use by having his company produce the software needed to do so.

6. Enjoy whatever you do – According to Bill Gates, if you want the best out of someone, that person needs to be doing what they love. You should assign people the work they like to do. Everyone should like their roles and responsibilities at your workplace.

7. Hire the best people and innovate every day – One of the secrets to Microsoft’s success is their humble workforce who believe in innovation and leading the industry in a new direction. Innovation is the key to success in every industry. The faster you do it, the better your chances are of being ahead of the competition for years to come.